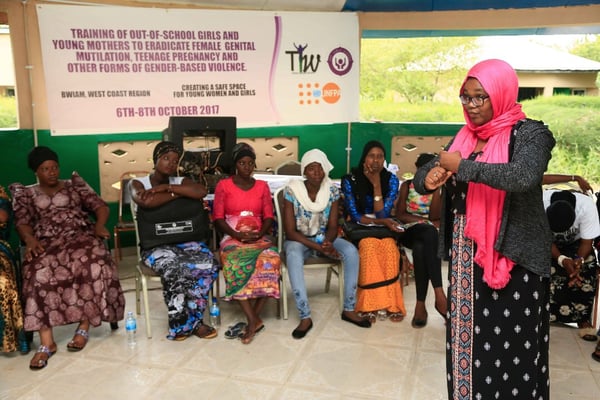 Musu Bakoto Sawo is National Coordinator of Think Young Women, a female-led non-profit organisation that aims to inspire and empower young women in Gambia. As a former child bride and a survivor of female genital mutilation (FGM), she has vowed to end the cycle of these harmful traditional practices in her generation.  Her advocacy contributed helped lead to child marriages and FGM being banned in Gambia. Despite her family marrying her off at the age of 14, she rebelled and insisted she be allowed to complete her education, eventually graduating from the University of The Gambia, Faculty of Law where she now lectures. When her husband died when she was 21, she inherited nothing. Education was the only reason she was able to thrive and she wants the same for all of Gambia’s girls.

Sawo was recognised as The Daily Trust African of the Year 2020 and received the 2017 Vera Chirwa award by the Centre for Human Rights, University of Pretoria, in recognition of her work in advancing women’s rights in Africa especially on FGM and other harmful traditional practices. She received the 2018 Commonwealth Points of Lights Award for The Gambia from Her Majesty, Queen Elizabeth II and she has been recognised as one of the 100 most influential young persons in West Africa by the Confederation of West African Youths in 2018. At Think Young Women, Sawo works to promote informal education. She provides leadership for the organisation's girls' mentorship programme, which targets adolescent girls in junior secondary school in Gambia. The programme provides life skills education and also serves as a platform for education and engagement on feminism, leadership, communication, sexual and reproductive health and rights, and human rights in general.

She also engages in policy-level advocacy and policy development around human rights, and has remained a staunch voice for improving access to education, especially for the most vulnerable and marginalised.

A passionate advocate for change, she has long fought for equitable access to education for girls. This has included interrogating and demanding a change in discriminatory policies that excluded school-going girls who became pregnant from re-enrolling into school to complete their education. This policy has now been revoked by the Ministry of Basic Education, and these girls have an opportunity to continue their education and access new opportunities.