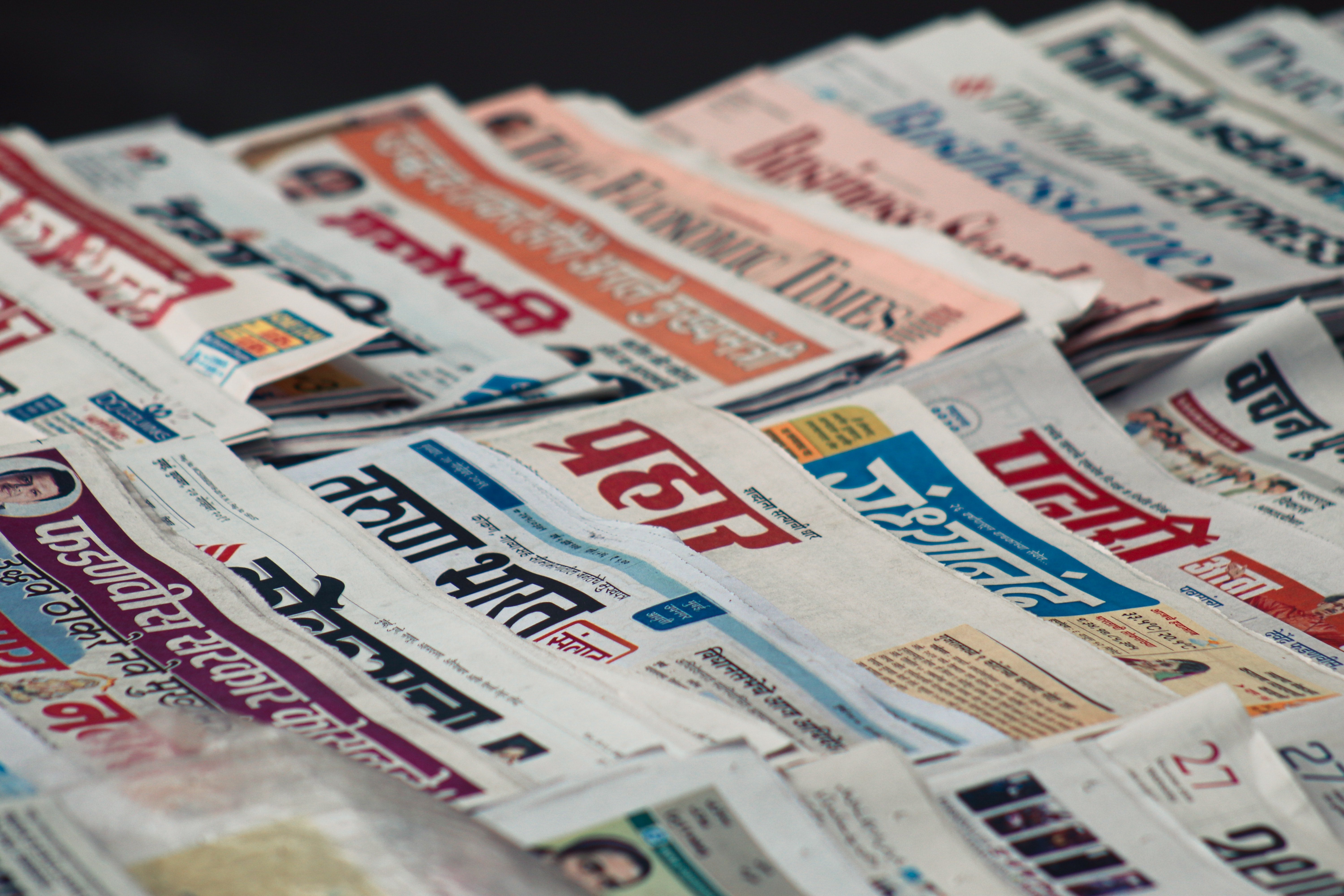 As a digital media platform, T4 Education is excited to tell the stories of schools that are transforming lives and communities, to share their innovative solutions in the international media, and to give teachers a voice on the world stage.

For all press enquiries about T4 Education, the World’s Best School Prizes, the Africa Education Medal, our Insights and our events, please contact:

The winners of the five World's Best School Prizes have been celebrated across the world's media from Reuters to BBC World Online, BBC World Service radio, Euronews, CBS and even the front page of the Times in the UK - inspiring countless others to learn from their examples and follow in their footsteps.

Prominent coverage also included the Telegraph in print, Independent, Daily Mail, Daily Express, the Scotsman, and TES in the UK; FOX, Yahoo! News, Nasdaq, The World, Patch.com, Chalkbeat in the US; El Mercurio and CNN in Chile; Daily Inquirer in the Philippines; BBC Focus on Africa; the Hindustan Times in India; R7 and Porvir in Brazil; La Nacion and Infobae in Argentina; the Star in Malaysia; RCTI in Indonesia; IOL and ENCA in South Africa; the Star in Kenya; Vanguard in Nigeria; and the National in the UAE.

The $50,000 each school won will help them develop and expand their vital education projects. But the impact has gone much further. Chile's President visited Escuela Emilia Lascar the day it won the World's Best School Prize for Innovation - not just to congratulate teachers and students but with a view to scaling their work across the country. After Bonuan Buquig National High School won the World's Best School Prize for Environmental Action its regional Director of Education similarly announced a scale-up of its work to 1.2 million students.

The winners of the World's Best School Prizes have shared their best practices through School Transformation Toolkits that showcase their “secret sauce” to innovative approaches and step-by-step instructions on how others can replicate their methods to help improve education everywhere. These are now available on the T4 Communities app.

Meet the Top 3 finalists for the World's Best School Prizes

The stories of these outstanding schools were celebrated in major media outlets across the world including the Telegraph, BBC, Independent, TES, Daily Express, and Daily Mail in the UK, FOX in the US, the Australian Financial Review, the Indian Express and NDTV in India, Globo in Brazil, the Star and New Straits Times in Malaysia, Manila Bulletin in the Philippines, Kompas in Indonesia, Independent Online in South Africa, El Mostrador in Chile, and also the World Economic Forum.

Professor Mamokgethi Phakeng, Vice-Chancellor of the University of Cape Town, South
Africa, was this month named the winner of the inaugural Africa Education Medal, launched
this year by T4 Education and HP, in collaboration with Intel and Microsoft.

Professor Phakeng was chosen as the winner from among 10 finalists for the Africa Education Medal from across the continent including H.E. Jakaya Kikwete, former President of Tanzania.

Among the buzz of excitement all across Africa and far beyond, Professor Phakeng was congratulated by none other than Oprah Winfrey.

Professor Phakeng’s story was celebrated in leading media outlets around the world including BBC World, Independent Online, South Africa’s largest news outlet, and other leading newspapers including The Times, The Star in print and The Argus in print; SABC’s pan-African broadcaster Channel Africa; South Africa’s leading morning news show SABC Morning Live; and Cape Talk. It was also covered in Punch, Nigeria’s biggest newspaper, plus other leading Nigerian newspapers the Guardian, Vanguard, This Day, and top business newspaper Business Day as well as MSN. There was coverage in News Ghana, one of Ghana’s biggest news sites; Cameroun24, one of Cameroon’s biggest news sites; iHarare in Zimbabwe; News Trends in Kenya; The Independent Observer in Zambia; and leading pan-African outlets AllAfrica, Africa.com, among many others.

Coverage came in from over 100 news outlets across the US including local affiliates of NBC, FOX, and ABC, as well as Yahoo! News in the UK and New Zealand, and RTL, the leading private broadcaster in Germany.

The Africa Education Medal was founded to recognise the work of those changemakers who
are transforming African education. UNESCO data show sub-Saharan Africa has the highest rates of education exclusion in the world. Over one-fifth of children between the ages of 6 and 11 are out of school, with girls particularly disadvantaged. However, tireless international efforts have seen Africa make great strides in boosting enrolment in the decades leading up to the pandemic. By celebrating the stories of those working every day
to expand upon these vital gains, the Africa Education Medal aims to inspire others to follow
in their footsteps and bring lasting change in African education.

T4 Education revealed the changemakers named as Top 10 finalists for the new Africa Education Medal, launched this year in collaboration with HP and Intel.

Their stories were celebrated across Africa including the Nation and The Star in Kenya, Punch, the Guardian, Vanguard, This Day and Business Day in Nigeria, CIO magazine, The Independent, Sunday World, SABC and ENCA in South Africa, The Citizen in Tanzania, Botswana Gazette and The Patriot in Botswana, and AllAfrica and Africa.com.

The Africa Education Medal was founded to recognise the tireless work of those who are transforming education across the continent - to celebrate the stories of those who have lit the spark of change so others will be inspired to take up the torch.

The winner of the Africa Education Medal will be announced in September.

Tech limitations and education assessment methods failed to accurately gauge student progress and identify learning losses created by COVID and piled pressure on teachers at a critical time, a new report by T4 Education in collaboration with EdTech Hub finds. The findings in six low- and middle-income countries were highlighted by outlets such as the Financial Express and CNN News 18 in India, the Philippine Daily Inquirer and Manila Times in the Philippines, Vanguard and the Guardian in Nigeria, and by Global EdTech.

This month, we announced the Top 10 shortlists for our five World's Best School Prizes. We celebrated the stories of these 50 inspirational schools across 29 countries, giving them a global platform so others can learn from them. The schools were hailed all over the world in the international press from the BBC, Independent, TES and Daily Mail in the UK, to the Times of India, The Star in Malaysia, Manila Bulletin in the Philippines, CBC News in Canada, ABC in Australia, InMenlo in California, Clarin in Argentina, El Tiempo in Colombia, Porvir in Brazil, The Times in South Africa, The Nation in Kenya, Punch in Nigeria, and Gulf News and The National in the UAE.

This month, T4 Education launched the new Africa Education Medal in collaboration with HP and Intel. The new award will be given to an outstanding individual who has demonstrated impact, leadership, and advocacy in the field of education.

We founded the new medal to recognise the tireless work of those who are transforming education across the continent – to celebrate the stories of those who have lit the spark of change so others will be inspired to take up the torch.

The Africa Education Medal has been featured on Citizen TV in Kenya and in The Star, Capital FM and Business Daily, as well as Punch, the Guardian, Independent, Vanguard and Business Day in Nigeria and Channel Africa in South Africa.

The World Bank, T4 Education and over 11,000 teachers this month called on governments, the international community and tech companies to work together to ensure every school in the world has reliable internet access and enough devices to bring educational technology (EdTech) into every classroom to close global learning gaps.

The communiqué, issued after the Teacher Tech Summit 2022, also called for EdTech to be designed in collaboration with teachers and harnessed to reduce educational inequalities. It has been signed by leading organisations including Scholastic, Cambridge Partnership for Education, the Lemann Foundation, Save the Children, Owl Ventures, and over 11,000 teachers from around the world including award-winning UK teacher Andria Zafirakou.

The communique made headlines around the world including the Indian Express, the Philippines Daily Inquirer in print, Education Technology, Global EdTech and ReliefWeb.

We have been overwhelmed by the response from schools across the globe to The World’s Best School Prizes after they featured in publications around the world from TES in the UK to Gulf News and the Khaleej Times in the UAE, The Tribune in India, Clarín in Argentina, O Globo, Porvir and UOL in Brazil, and Our Today in Jamaica.
The new $250,000 Prizes will celebrate schools everywhere for the pivotal role they play in developing the next generation of learners and for their enormous contribution to society’s progress, especially in the wake of COVID.

We are excited to announce we will reveal the Top 10 shortlist for each of the five World’s Best School Prizes in June.

All 50 shortlisted schools across the five Prizes will share their best practices through toolkits that showcase their “secret sauce” to innovative approaches and step-by-step instructions on how others can replicate their methods to help improve education everywhere.